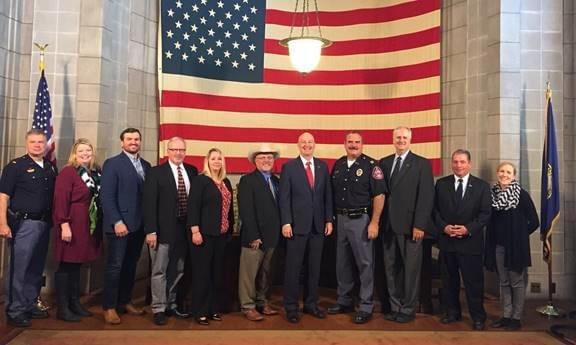 LINCOLN, Neb. – Governor Pete Ricketts, the Nebraska State Patrol (NSP), the Nebraska Department of Agriculture (NDA), and agriculture producers throughout the state of Nebraska are working together to keep Nebraska roads safe and keep livestock moving.

The collaboration includes several key points that will assist livestock haulers in complying with the rules of the road.  It also provides for a system to rapidly address situations in which a livestock hauler is put out of service for various reasons.

The commercial trucking industry is regulated to ensure that of Nebraska roadways are safe, but the Nebraska State Patrol understands that an enforcement action that places a truck out of service can have a direct impact on livestock haulers, including the health and safety of the livestock being transported.

Among the pieces of the partnership, NSP has developed a list of the most common violations found during inspections.  This list will assist livestock haulers in ensuring their truck and trailer are in safe, working order.

In the event that a truck and/or trailer has be placed out of service, the partnership also sets up a system of best practices for how to rapidly unload and move livestock to a safe location.