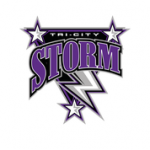 The Tri-City Storm dropped game three of the Western Conference Final 3-2 Friday night in Sioux Falls and were eliminated from the 2019 Clark Cup Playoffs. The Storm will now turn their attention to the 2019 USHL Phase I & Phase II draft. The Draft takes place in two stages, beginning with Phase I tonight at 6:00. During Phase I of the Draft, clubs select 2003 birth-year players over the course of 10 rounds. Phase II of the Draft begins tomorrow morning at 10:00. Team can select any player born between the years 1999 and 2003 until each team has 45 players on their roster.