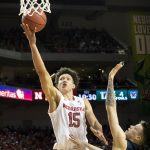 University of Nebraska forward Isaiah Roby was one of 66 players invited to the 2019 NBA Combine.  The 6-8 junior is the first Husker invited to the NBA Combine since Terran Petteway in 2015. Roby set career highs in scoring (11.8 ppg), rebounding (6.9 rpg), assists (1.9 apg) and steals (1.3 spg), while averaging 1.9 blocks per game this past season. Following the combine, Roby will have until Wednesday, May 29th to withdraw from the NBA Draft and preserve his collegiate eligibility. The 2019 NBA Draft is set for Thursday, June 20th at Barclays Center in Brooklyn, N.Y.