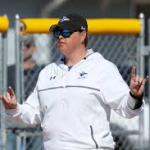 UNK Athletics Director Marc Bauer says the University will immediately begin a search to replace head softball coach Holly Carnes. A former Loper player and assistant coach, Carnes had 368 career wins in her 19-year tenure as head coach and saw 43 of her players earn all-conference recognition. UNK went 20-24 (12-14 MIAA) this past spring, finishing 10th in the league standings. Assistant Coach Steve Stutzman will assume the role of Interim Head Coach until a national search and hiring process has been completed.

UNK freshman right fielder Carlee Liesch has earned another honor. She was named to the 2019 Division II National Fastpitch Coaches Association (NFCA) All-Central Region team Thursday. Wednesday she was named all-region by the D2 Conference Commissioner’s Association. She was tabbed second-team on both squads. NFCA all-region honorees have a chance to earn All-American honors; that team will be named Wednesday, May 22nd, at the NCAA Division II National Championship Banquet in Denver, Colo. The 2019 MIAA Freshman of the Year, Liesch was one of the top freshmen in Division II this spring, batting .458 with 12 doubles, three triples, seven homers and 18 RBI’s. Batting leadoff in 32 games, she scored a team-best 51 runs while fielding at a .978 clip. Her 71 hits are fourth most in school history for a single season with her batting average the second highest.