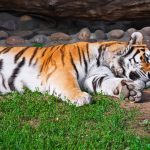 LINCOLN, Neb. (AP) – Officials with the Lincoln Children’s Zoo say one of the attraction’s new tigers has killed its nearly-new parrot.

The Lincoln Journal Star reports that the incident happened Tuesday when a green-winged macaw, which the zoo acquired in November, flew into the zoo’s tiger habitat, which opened to the public last week.

Zoo officials say the bird was being trained as part of a planned public presentation to fly from the zoo’s Secret Jungle to its outdoor theater when it detoured into the Sumatran tiger habitat.

Zoo spokesman Ryan Gross says a tiger “knocked it down.” The bird later died at the zoo’s veterinary clinic.

Gross says the zoo has suspended flight rehearsals. The zoo and the tiger exhibit remained open to the public Tuesday.