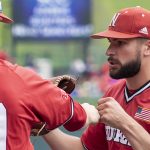 Depending on how they do this weekend, the Husker baseball team could finish anywhere from first to seventh in the Big 10 conference. However, Nebraska’s final home stand in 2019 is significant for more than just that. It is also the last time Nebraska’s seniors will play at Haymarket Park.

“It’s crazy. I can remember about two weeks when I was just thinking to myself ‘holy cow, this is just going by so fast,’” senior infielder Angelo Altavilla told reporters on Wednesday. “I wish it would slow down, but it’s not.”

This senior class has nearly experienced the gamut of college baseball. In 2017, they helped Nebraska win their first conference title in the Big 10 but then the following year, they failed to qualify for the Big 10 Tournament entirely.

“They’ve been through a lot,” NU head coach Darin Erstad said. “They’ve won the conference and got their teeth kicked in.”

To send themselves out on a high note, the senior class certainly has their work cut out for them, considering the first place team in the Big 10, Michigan, is coming to town. With a 15-5 conference record, the Wolverines haven’t had too many struggles in Big 10 play.

“They can really pitch. (They) have a lot of depth in their lineup and speed,” Erstad said. “They’re a well coached team. They can beat you in a lot of ways and for the most part, they haven’t beaten themselves.”

Altvailla says the team is ready to rise to the challenge. “I would want nothing more than to knock Michigan out of first place and hopefully give us a shot. The excitement is high right now and we’re fighting for our lives.”

The first of their three game series is set for Thursday at 7:30 p.m. With rain in the forecast for Saturday, there is a possibility of a doubleheader on Friday, however as of right now, Friday’s game is set to begin at 8:00 p.m. and Saturday’s game will begin at 2:00 p.m. Coverage of all of those games will begin 30 minutes prior to first pitch on KLIN.