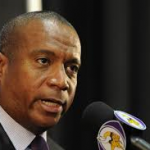 The Big Ten has its sixth commissioner in conference history. The conference announced its replacement for the departing Jim Delany at a news conference on Tuesday morning—Kevin Warren. Warren, who was the Vikings’ chief operating officer, becomes the first African-American commissioner of a Power Five conference. Delany announced in March that he would be retiring at the conclusion of his contract. He’s held the job since 1989. During his tenure, the Big Ten expanded to 14 members after adding Penn State (1990), Nebraska (2011), Maryland (2014) and Rutgers (2014). Delany also helped launch the Big Ten Network in 2007, which was the first TV network for a Power 5 conference. In 2018, revenue distribution topped $50 million per school, and USA Today reported the Big Ten recorded nearly $759 million in revenue during its 2018 fiscal year.