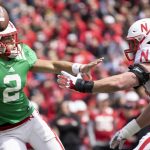 Kanawai Noa had never been to the Midwest before, let alone Nebraska. However, Noa didn’t hesitate when he decided to take the leap from Cal, where he spent the past four seasons, to play out one final year of college football at NU. Such is the allure of playing under one of the nation’s most exciting head coaches, Scott Frost, and one of the nation’s most promising young quarterbacks, Adrian Martinez.

“It’s all about business. The quarterback, the type of OC (offensive coordinator), the offensive scheme… it was an easy pick for me,” Noa told a group of reporters at the Hawks Championship Center Wednesday morning following the Husker’s practice.

At Cal, Noa appeared in 35 games, making 16 starts. He caught 96 passes for 1,267 yards and 6 touchdowns. He’ll have big shoes to fill in. though. Stanley Morgan Jr., who is now with the Cincinnati Bengals, was the first Husker receiver in program history to reach 1,000 yards receiving in a single season. A Morgan clone Noa is not, however there’s quite a lot the 6-foot, 200 pounder will bring to the table.

“My strength is definitely finding (and) exploiting the defensive coverage,” Noa said. “My post snap read is probably my best attribute and being able to find space.”

There’s a big void to fill at running back as well. Without Devine Ozigbo, who rushed for over 1,000 yards in 2018, the Huskers now have a handful of running backs vying for the No.1 spot on the depth chart. However, according to running backs coach Ryan Held, there are more than a few players who will see playing time at the position.

“In this offense, as fast as we go, (and with) the physicalness of the Big 10, you can’t just have one or two guys,” Held said.

There are already a few favorites that have begun to emerge that will see the bulk of the playing time, according to Held.

“We’ve got some guys to work with, for sure,” Held said. “Dedrick Mills is a big, strong, fast, physical back. Mo (Maurice Washington) gives you the speed and the receiver ability. Rahmir Johnson – I told everybody – keep an eye on Rahmir Johnson. He’s got a chance. He’s a good player. I’ve just got to get him to cut loose.”

There’s freshman running back Ronald Thompkins as well, however he’s not on the 110 man roster, as he’s still recovering from an injury. Held also mentioned fan favorite, senior Wyatt Mazour, as a contender for playing time.

Additionally, 5-foot-10 freshman Wan’Dale Robinson will split time between running back and wide receiver. Held said that Robinson has “done a really good job up to this point” but does not yet know exactly how many reps Robinson will see at either position position as of yet.

In other news and notes from practice: