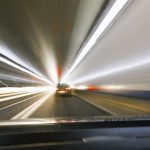 Mustang speeding near North Platte. The pursuit began about 3 am when the car flew by a parked trooper and accelerated. Speeds reached 158mph. The vehicle was stopped

using spike strips near Odessa. The occupants tried to flee on foot. More than a pound of marijuana and controlled pills were found in the vehicle. 27-yearold Patrick Thompson Jr.

and 21-year-old Alexandra Ganow, both of Lincoln, were arrested after being medically cleared.