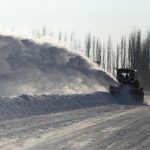 SCOTTSBLUFF, Neb. (AP) — Forecasters say a wintry storm system could drop up to 10 inches (25.4 centimeters) of snow on northwest Nebraska later this week.

The National Weather Service has issued a winter storm watch for the northern half of the Panhandle. The service says ice could form on wet pavement late Wednesday night or early Thursday as the system arrives, followed by snow and winds gusting to 35 mph (56.3 kph). Travel could be extremely hazardous.

Overnight low temperatures could dip below 20 degrees (minus 6.7 Celsius).

The system is expected to move east, leaving less snow across much of northern and northeast Nebraska, with low temperatures well below freezing.

The weather service says the system also could drop some snow on northwestern and northern Iowa on Friday or early Saturday.