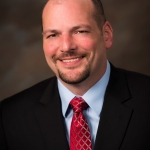 PAPILLION, Neb. (AP) – A Papillion city councilman has been cited for suspicion of negligent child abuse after being accused of leaving bruises on his girlfriend’s 5-year-old son.

The Omaha World-Herald reports that Jason Gaines was cited in early October.

London said a report was made to the Papillion Police Department on Sept. 7. The sheriff’s office took over the investigation to avoid any conflict of interest.

City spokesman Trent Albers says the city is aware of the citation, but declined to comment further.

Gaines was first elected to the council in 2012. In 2005, he pleaded guilty to third-degree domestic assault in a Cass County case and was sentenced to 18 months’ probation.