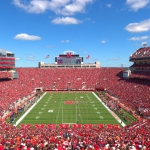 “I don’t care”… We’ve all said it or thought it at one point and time in our life. It’s called ambivalence, “the state of having mixed feelings or contradictory ideas about something or someone”.

Thanks in large part to the unrealistically high expectations that began almost immediately after the hiring of Scott Frost, some Husker football fans have unfortunately reached a point where they’ve become ambivalent. In his second year at Central Florida Frost coached a team that went 13-0. Surely the Frost led Huskers would be able to match the Golden Knight’s upward trajectory. He would unite the fan base again, energize the team and make us all proud, and maybe… just maybe, be a contender for the Big Ten West Division title.

But in year two at his alma mater, some Husker fans who had high hopes for the return of the program’s glory days have instead reached a point of ambivalence. They just don’t care anymore. Remember the joy, the pride, the camaraderie we all felt during the programs glory days, a unified stance that earned Huskers fans the title “the best fans in college football”? When the Huskers did fall, the result was normally frustration and sometimes misguided anger. But it appears those days are gone. And so is that fanatical passion.

After suffering through yet another disappointing season, some Husker fans have reached a point where they just don’t care anymore. The sting of a loss no longer dominates their day or week. They’ve reached a point where they shrug their shoulders, accept defeat, and move on to more important things in their life. No more anger, just a feeling of malaise. In many ways, it’s a reflection of a team that at times looks ambivalent on the field. Maybe that’s the problem. Coach Frost says “just ok” isn’t good enough. Fans, I think, would agree.