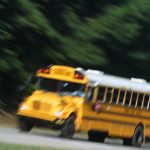 LINCOLN, Neb. (AP) – Authorities say two students on a Lincoln school bus and five people in a car were sent to a hospital after a collision.

The crash between the eastbound bus and northbound car occurred about 7:30 a.m. Wednesday. Officials say the north-central Lincoln intersection had no stop signs or other control devices.

All 10 students on the bus and its driver were evaluated, and two students were taken to a hospital out of what school officials say was an abundance of caution. All the injuries were considered minor.