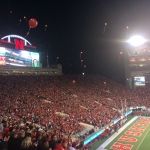 The Nebraska men’s basketball team fell to George Mason 66-85 yesterday at the Cayman Islands Classic. The Huskers will face South Florida this afternoon. Tipoff set for 4 p.m. That game can be heard here on KGFW. Coverage with the Husker Sports Network begins at 3 p.m.

The Husker women are in Vegas for the South Point Shootout this weekend with a game against Southern Cal Friday and Sacred Heart Saturday.

UNK Volleyball will again host the NCAA regional tournament December 5-7. The #1 seed and 2nd ranked Lopers face #8 Oklahoma Baptist in the opening round. First serve set for 7:30 at the Health and Sports Center.

UNK Men’s and Women’s basketball are off until December 3rd when they host Fort Hays State.

The Tri-City Storm is scheduled to host Omaha tonight. Puck drops at 7:05.