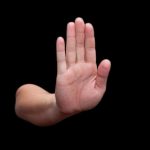 PAPILLION, Neb. (AP) – The city of Papillion is using signs to try to slow traffic at a downtown intersection where a 10-year-old girl was fatally hit by a car earlier this year.

The Omaha World-Herald reports that six yellow crosswalk yield signs were bolted to the street on Monday at the intersection.

The city has been analyzing the crosswalk after a driver struck Abby Whitford in August as the girl crossed the street on her way to Sump Memorial Library. She later died in a hospital.
The 19-year-old driver was charged in October with failure to yield to a pedestrian, speeding and misdemeanor motor vehicle homicide.

The city is considering other changes, such as narrowing lane widths and installing pedestrian islands – small segments of sidewalk – in the middle of the street.