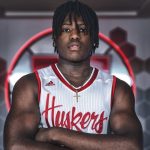 The Nebraska mens basketball team will be trying to snap their three game losing streak tonight with a game at Wisconsin. The Huskers were topped by Indiana at Pinnacle Bank Arena Saturday night. With the loss they fell to 7-11 on the season and 2-5 in the Big Ten. The Badgers are 11-7 overall and 4-3 in Big Ten play and are currently tied for fourth in the Big Ten standings. The Huskers and Badgers tipoff tonight at 8:00.

The Husker women are back in action tomorrow night when they host Purdue, tipoff will be at 7:00.

New offensive coordinator Matt Lubick says he’ll dive right in to recruiting and getting to know his players when he arives in Lincoln Wednesday.

Receiver Kris Abrams-Draine, a former Ole Miss commit, says he was impressed by his Lincoln visit and will decide on a school before signing day Feb. 5th. The 6-foot-1, 170-pound Abrams-Draine is a four-star prospect according to 247Sports Composite Rankings.

Nebraska has released its schedule of camps and clinics for the spring and summer. The Friday Night Lights events will be held June 5th and June 19th. These are typically Nebraska’s biggest recruiting events of the summer, high school players are invited to work out and learn in Memorial Stadium with Husker coaches.

You can find links to these stories, and more, at huskermax.com.