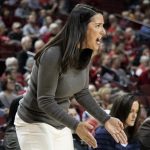 The Nebraska womens basketball team scored just 22 points in the second half, as Minnesota rallied for a 67-61 win last night in Minneapolis. With the loss, the Husker women slipped to 15-6 on the season and 5-5 in the Big Ten. The Husker women are back in action Sunday hosting Ohio State. Tip-off between Huskers and the Buckeyes at Pinnacle Bank Arena is set for 2:00 that afternoon.

The Husker men return to action tomorrow night, hosting 24th ranked Penn State in the annual Coaches vs. Cancer Suits and Sneakers game. Tipoff time at PBA is set for 6:00.

The Nebraska baseball team’s annual Fan Fest is scheduled for tonight from 6:00 to 8:00 in the Hawks Championship Center, located next to Memorial Stadium. The event will give fans a chance to meet the 2020 Huskers and get autographs. The Huskers open the regular season on Friday, Feb. 14th at Baylor in Waco, Texas. Nebraska’s home opener is scheduled for Friday, March 6th against Columbia at Hawks Field.

Tri-City Storm open a four game road swing tonight in Sioux City. The puck is set to drop at 7:05.