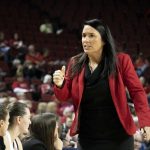 The Nebraska womens basketball team was topped by Ohio State, 80-74, in overtime yesterday at Pinnacle Bank Arena. With the loss, the Husker women slipped to 15-7 overall and 5-6 in the Big Ten. The Nebraska women are at Iowa Thursday, tipoff will be at 7:00.

The Nebraska mens basketball team was upended by 24th ranked Penn State, 76-64, Saturday night at Pinnacle Bank Arena. With their 7th straight loss they fall to 7-15 on the season and 2-9 in the Big Ten. The Husker men are at 18th ranked Iowa Saturday, tipoff will be at 5:00.

Tickets to the 2020 Nebraska Football team’s Spring Game go on sale this week. The spring game has been set for Saturday, April 18th at Memorial Stadium with kickoff time to be determined at a later date. Season ticket holders will have the first opportunity to purchase spring game tickets beginning tomorrow morning at 10:00. The general public can purchase their tickets Wednesday morning at 10:00. Fans can purchase tickets on-line at Huskers.com, or by phone at 1-800-8-BIG RED.

The UNK basketball teams wrapped up a three game road swing Saturday at Fort Hays State. The Tigers topped the Loper men, 69-56. With their third straight loss they fall to 12-8 on the season and 6-5 in conference play. The Loper women topped 16th ranked Hays, 72-67. With their eighth straight win they improve to 20-2 on the season and 9-2 in the MIAA. The UNK basketball teams will host Central Oklahoma and Newman this week.

The 6th-ranked Central Oklahoma Bronchos used back-to-back falls and a forfeit to defeat the 3rd-ranked UNK wrestlers, 24-17, Saturday afternoon at the Health & Sports Center. This dual was the default “MIAA Championship”. The UNK wrestlers will host the Newman Jets Thursday at Kearney High School.

Tri-City Storm opened a four game road swing Friday with a 4-2 win in Sioux City. The Storm are at Sioux Falls tomorrow night. The puck will drop at 7:05.

Wednesday is National Letter of Intent Signing Day. Ten Kearney High student-athletes will be signing national letters of intent in the Chat Auditorium at 7:30 that morning.