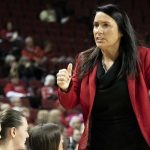 The Nebraska women’s basketball team hit less than 33 percent of their shots from the field, as they were upended by 20th ranked Iowa, 76-60, last night at Carver-Hawkeye Arena. The Husker women host 18th ranked Indiana Sunday. The Huskers and Hoosiers will tipoff at 2:00.

After a week off, the Nebraska men’s basketball team begins a two-game road trip tomorrow in Iowa City, taking on the nationally ranked Hawkeyes. The Huskers, who have lost seven in-a-row, won the first meeting in Lincoln, 76-70. The 17th ranked Hawkeyes are 11-1 at home, including 10 straight at Carver-Hawkeye Arena. Tipoff is tomorrow at 5:00.

The UNK basketball teams knocked off Central Oklahoma last night at the Health and Sports Center. The Loper men snapped their three game losing streak with a, 66-49, victory. The 23rd ranked Loper women pushed their winning streak to nine in-a-row with a 75-69 win. The UNK basketball teams host the Newman Jets tomorrow afternoon. The women will tipoff at 2:00, the men at 4:00.

The 3rd ranked UNK wrestlers got back-to-back falls and a major decision to hold off the Newman Jets, 24-21, last night at Kearney High School. The Loper wrestlers close out the regular season next week at Fort Hays State.