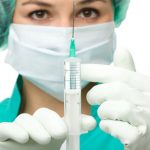 SAN DIEGO (AP) – Officials say a labeling error caused a person infected with the novel coronavirus to be mistakenly released from a hospital but the oversight was noticed as she was returning to a San Diego military base.

Officials said Tuesday the mix-up came to authorities’ attention while she was being driven back to Marine Corps Air Station Miramar, where more than 200 evacuees from China are living under federal quarantine.

Officials say she was isolated at the base for testing and sent back to a hospital after results came back.

The agency says it will now assign a laboratory specialist to prevent incorrect labeling.