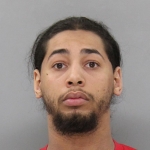 HASTINGS, Neb. (AP) – A Hastings man initially charged with murder has been given 38 to 40 years in prison.

Prosecutors have said Mullen and another man, Daniel Harden, tried to rob Jose Hansen on Sept. 11, 2017, and Hansen was shot in the back.

Harden was acquitted of murder and weapons charges but convicted of robbery conspiracy. He was sentenced in January to 40 to 44 years.