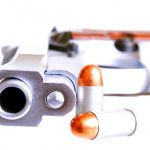 A 14-year-old is suspected of shooting to death 15-year-old Sylas Lieb inside a northeast Omaha home on Wednesday night.

Officers called to the scene around 7:15 p.m. say Lieb had been shot in the chest.

Douglas County Attorney Don Kleine tells television station KETV that Lieb, the 14-year-old suspect and an 18-year-old had been smoking marijuana most of the day before the shooting happened and that the shooting was accidental.

The 14-year-old was arrested and booked into the Douglas County Youth Center on suspicion of manslaughter.