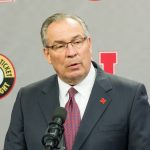 The Nebraska football team’s Spring Game will not be played April 18th, and probably not at all. Nebraska Athletic Director Bill Moos made the announcement during an appearance on the Husker Sports Network last night. The Nebraska volleyball team’s spring match, scheduled for Saturday, April 25th against Northern Colorado in Grand Island, has been canceled due to the COVID-19 public health threat. Tickets purchased online on Ticketmaster.com or via phone will be automatically refunded. Tickets purchased in person can be returned to the Heartland Events Center box office for a full refund.

After convening the Council of Presidents Executive Committee, and with input from the National Administrative Council and National Eligibility Committee, the decision has been made to cancel the NAIA’s 2020 spring sports season, effective immediately.

The annual UNK High School indoor track meets, scheduled for March 19-21, have been canceled and will not be made up. The meets are a fundraiser for the UNK track program and allow high school student-athletes from around the state a tune up meet before the outdoor season begins.