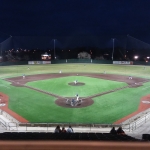 The Nebraska Athletic Committee will be meeting today to discuss options for a modified Legion Baseball season. The American Legion National Organization has shut down all sponsorship and all involvement in baseball for the 2020 season. The American Legion National Organization had already cancelled all 2020 season Regional Tournaments and the World Series. Governor Pete Rickeetts has approved re-opening youth baseball and softball, with practice starting June 1st and games starting June 18th. Nebraska Legion Chairman, Jody Moeller said teams will not have the National American Legion’s sponsorship or involvement. Without national backing, they will be required to get insurance before registering for the regular season. He said it is still undecided what venues teams will play at but teams still can wear their Legion jerseys with the American Legion patch.

Anyone wishing to pay respects to Jerseys Seniors/Kearney Catholic softball coach Russ Hiemstra can gather at Patriot Park this morning. Friends are asked to arrive between 10:00 and 10:30. The funeral procession will pass through after the private ceremony.