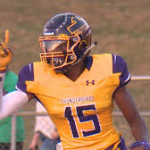 The high school coach of Zavier Betts confirmed the four-star wideout from Bellevue West will qualify academically at Nebraska and join the team for the 2020. Nebraska signed Betts in December. The 6-foot-2, 200 pound Betts had over 3,000 receiving yards and 46 career touchdowns for the Thunderbirds.

Because of a ban issued by the Big Ten, Husker returnees and 2020 recruits will have to wait until June 1st to begin team activities.

The Nebraska wrestling team has added graduate transfer Liam Cronin. A 125-pounder, Cronin comes to Nebraska after spending the first three seasons of his collegiate career at Indiana. Cronin has 41 collegiate victories to his credit, including 17 during the 2019-20 campaign on his way to a fifth-place finish at the 2020 Big Ten Championships. Cronin’s performance earned him an automatic bid to the 2020 NCAA Wrestling Championships, but he never had the chance to take the mat as the championships were canceled due to the COVID-19 pandemic.

There will be Legion Baseball this summer. That according to a post on the Nebraska Legion baseball website. The proposed plan must still be reviewed and approved by the Department of Nebraska Executive Committee. More information from Friday’s meeting with the Nebraska Athletic Committee will be posted this week. Kearney Legion officials are meeting Tuesday to decide how they will move forward.