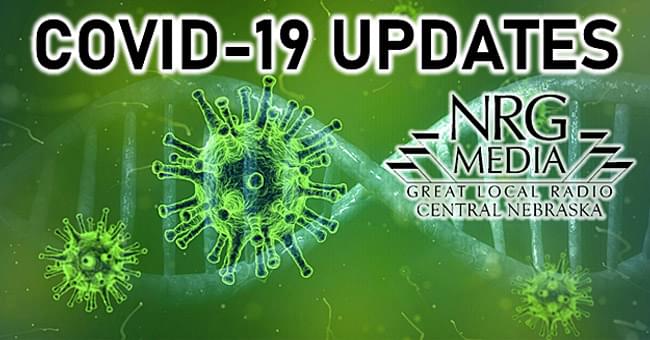 GRAND ISLAND, Neb. (KGFW) – The Central District Health Department reported three new deaths yesterday but did not disclose details. 50 in the district have now died from COVID-19. 17 new cases were reported yesterday. There were none the day prior. Area cases have continued to trend downward since hitting a weekly high of 371 May 1. The Central District has only reported 35 cases so far this week.

Two Rivers reported a single new COVID-19 case yesterday. It was in Dawson County. The District’s total is 990.

Statewide, 276 new cases were reported yesterday bringing the running total to 11,122. Six new deaths bring that total to 138. Most of the state’s cases are in Douglas County, which has nearly 2,700. Nebraska’s negative test rate has risen to just over 85% from a low of about 81%.

LINCOLN, Neb. (AP) – A Nebraska lawmaker who’s worried about the spread of the coronavirus is calling for a legislative rule change that would allow state senators to vote on bills remotely when this year’s session resumes on July 20. Sen. Patty Pansing Brooks, of Lincoln, sent a memo to her fellow lawmakers arguing for the change. Legislative leaders have said the Nebraska Constitution requires state lawmakers to vote in-person. Pansing Brooks made a similar argument in March, just before lawmakers briefly reconvened to approve emergency state funding to fight the coronavirus.

OMAHA, Neb. (AP) – Nebraska’s governor says he’s “very pleased” with a coronavirus testing program established by out-of-state contractors. Gov. Pete Ricketts’ words of confidence in TestNebraska came Wednesday despite uncertainty that the program will meet a goal of 3,000 tests per day by the month’s end. Nebraska announced the $27 million, no-bid contract with Utah-based Nomi Health and other firms on April 21. The state’s chief medical officer says Nebraska tested 1,197 people on Tuesday. Ricketts says the problem stems in part from residents who qualify for a test after filling out an online questionnaire, but don’t show up as scheduled.

OMAHA, Neb. (AP) – Creighton University has furloughed 190 employees and made several other spending cuts because of the impact of the coronavirus outbreak. Creighton officials said Wednesday they expect to have to cut at least $35 million from the university’s budget to offset declining revenue from tuition and fees. The university said it will suspend its contributions to employee retirement plans on July 1, and top executives will take a pay cut. Creighton said it also won’t pay merit raises this year and will cut discretionary spending. Officials said additional cuts could be needed depending on enrollment levels.