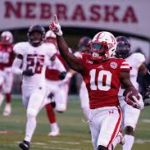 JD Spielman won’t be back for his senior season as the receiver has entered his name into the transfer portal. Spielman left the team on March 2nd before the beginning of spring practices, returning home to Minnesota to handle what Nebraska called a “personal health matter.” Spielman has not yet graduated, and used a redshirt season in 2016. If he’s to play at the Division-1 level in 2020, he’ll need a NCAA waiver to do so. Spielman was Nebraska’s leading receiver last season, with 49 receptions for 898 yards and five touchdowns.

The NCAA will consider a six-week plan for football teams to prepare for the start of their seasons. The proposal would allow a total of 20-hours of weight training, conditioning, film study, meetings and walk-throughs with coaches in the two weeks prior to the start of fall practice. The plan still needs to be approved by the Division I Council at their June 17th meeting.

Nebraska Athletic Director Bill Moos says there is an 80 percent chance that the Husker football team’s schedule will be unchanged this fall.

Hastings St. Cecilia point guard Bailey Kissinger has announced her commitment to the UNK women’s basketball team. Kissinger, a junior to be, was named a Class C-2 first-team all-stater both her freshman and sophomore seasons while leading the Silver Hawks to back to back state titles.