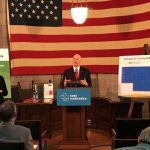 Monday Afternoon, Governor Pete Ricketts announced several changes to local Directed Health Measures which will pave the way for the return of a bit of normalacy for athletes and sports fans in Nebraska. The loosened restrictions will allow fans to attend youth and school games starting June 22nd; currently attendance is limited to household members. In addition, contact sports (such as football, basketball, soccer and wrestling) can now begin workouts starting July 1st. Monday’s announcemnt by the Governor also means the Nebraska Shrine Bowl can be played July 11th in Kearney.

The Nebraska 8-Man Coaches Association on Monday decided to cancel the 2020 SERTOMA 8-Man All-Star Game in Hastings due to numerous health and logistical concerns.

247 Sports has ranked the 2020 Nebraska football schedule from easiest to toughest games. The Halloween game at Ohio State ranks as the hardest with the September 12th game at home against Central Michigan coming in as easiest. The Huskers play five teams ranked in the pre-season top 25.

Monday was the first day 2022 basketball recruits could hear from college coaches. And it didn’t take long for Isaac Traudt to hear from Nebraska and Creighton. Both schools extended scholarship offers to the 6-foot-8 Grand Island forward Monday. Traudt is one of the top prospects in the region, coming in at No. 118 in the latest Rivals’ rankings. He already had offers from Kansas State, Omaha, South Dakota and Drake.

In baseball news, Texas A&M’s Cam Wynne on Monday announced his plans to transfer to Nebraska. The 6-foot-5 Lincoln native made two relief appearances for the Aggies in the abbreviated 2020 season after spending two years at Johnson County Community College in Kansas. The 21-year-old righty has two seasons of eligibility remaining and expects to be available for the 2021 season once he files a waiver with the NCAA.

The Pinnacle Bank Championship yesterday announced that the tournament, scheduled for July 30th-August 2nd at The Club at Indian Creek in Elkhorn, will be played without spectators. The decision was made based on the recommendations and regulations set forth by local, state and federal government agencies.

The University of Iowa has cut ties with strength coach Chris Doyle, announcing a separation agreement that will pay him more than $1.1 million after former Hawkeyes accused him of mistreating and belittling African American players. Doyle had been on staff at Iowa for 21 years.

The MIAA CEO Council has approved action plans for the 2020-2021 academic year which includes modifying the regular-season schedules and championships in all sports. In response to the NCAA requirements in maximum and minimum allowable contests and dates, the Council approved a new 10 game football schedule and the elimination of non-conference play in men’s and women’s basketball, volleyball, and women’s soccer. The Council also approved modifying the brackets and dates for the 2020-2021 MIAA Championships.