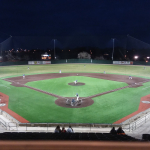 “Play Ball!” All four Kearney Legion Baseball teams are in action today. The Runza Seniors are hosting Grand Island Home Federal in a double-header at Memorial Field. First pitch for game one is 5:00. Both games of today’s double-header can be heard on your long time home of Kearney Legion baseball, KGFW and online at KGFW.com. Due to current restrictions attendance at games at Kearney’s Memorial Field will be limited to immediate family members only, but that restriction will end Monday. The Post 52 Juniors are on the road, playing in the four-day Lincoln Southeast Tournament. They play Lincoln Southwest this morning at 11:00, and Papillion-LaVista this afternoon at 1:30. Both of those games are being played at Den Hartog Field. The Jerseys Seniors and Five Points Juniors are in St. Paul tonight. The Juniors will take the field at 5:30, the seniors game will follow around 8:00.

The Pinncle Bank American Legion baseball team in Lincoln has been quarantined through June 30th as a number of players have tested positive for COVID-19. The team, which is made up of players from Lincoln Southwest, was scheduled to begin their season this week.

As expected, the NCAA has approved a college football preseason calendar that includes two weeks of minicamp-style practices before the typical preseason camp. Referred to as “enhanced summer access,” the two weeks will be dedicated to weight training, conditioning, film review, walk-throughs and meetings. Players will be allowed up to 20 hours of athletic related activities per week, including up to one hour each day for a walk-through. The players won’t be allowed to wear helmets or pads during walk-throughs, but they can use a football.

The new calendar will allow training camps to begin Aug. 7th. That would allow the season to begin on time, the first week of September. The voluntary, unsupervised workouts — occurring at most college football programs — will continue until July 12th. Starting July 13th, coaches can start requiring players to work out and do film study for up to eight hours a week through July 23rd. The July 24th-Aug. 6th period is set up like a mini-camp, with coaches getting 20 hours per week with student-athletes. Eight hours can be used for strength and conditioning, eight can be used for film review and team meetings and six hours can be used for walk-throughs with a football. The normal training camp — which begins with unpadded practices and progresses to pads in the first week — can start Aug. 7th. The NCAA also voted to waive the preseason limit of 110 athletes.

Barron Miles, Jr., the son of former Nebraska defensive back Barron Miles, is joining the Huskers as a walk-on this fall. Miles Jr played both ways for nationally touted Chandler, Arizona high school but plans to play receiver at Nebraska. He is already in Lincoln. Miles missed his sophomore and junior years due to FAI hip surgeries, but returned for a portion of his senior year.

Hayden Kubik has announce she’s committed to play volleyball at Nebraska. The outside hitter and sister of Husker Madi Kubik will be a junior this year at Valley High School in West Des Moines. She is the top recruit in Iowa for 2022.

Head coach of the UNK volleyball team, Rick Squires, is the Lincoln Journal Star State College coach of the year. Squires led the Lopers to a runner up finish in Division Two last season.

The schedules for the UNK volleyball team, and soccer team, were released Wednesday by the MIAA.

The volleyball team’s adjusted schedule has the Lopers playing 20 conference matches, 10 at home, and 10 on the road. The NCAA’s 20-game cap at the Division II level is meant to help alleviate costs brought on by the Covid-19 crisis. Teams can play multiple matches on a date, so UNK and many other schools are aiming to combine a weekend schedule onto a single day. That would open up dates for possible non-conference action. If some switches are made the Lopers could begin the year as scheduled at the Colorado School of Mines Tournament (September 4-5) with opponents to be determined. UNK is hopeful their annual home tournament can take place the following weekend (September 11-12) but that is TBD as well. The first scheduled home match is September 18th against Emporia State. The MIAA Tournament, which was moved to Kansas City last fall, returns to campus this season. That event will be held the week of November 16-21. Currently going through voluntary workouts, the Lopers report to fall camp in mid-August.

The UNK women’s soccer team’s adjusted schedule has the Lopers opening the fall at home against the Washburn Ichabods. The Lopers will host the Bods Sunday, September 13th. The revised schedule hasn’t changed too much from the original but UNK does lose four non-conference games as well as a non-league contest vs. Emporia State. The Lopers home slate includes games against Emporia State (Sept. 25th), Newman (Oct. 2nd), Central Oklahoma (Oct. 4th), Northwest Missouri State (Oct. 9th), Missouri Western State (Oct. 11th) and Fort Hays State (Nov. 1st). Conference action will begin wrapping up Sunday, November 8th, with “Flex Weekend”, as the top eight teams in the league standings will face each other. The eighth seed will travel to the first place team, number two hosts seven etc. The four winners advance to the MIAA Tournament at the highest remaining seed on November 13 and 15. The schools that are in places nine through 12 will play on November 8th as well with the match ups based on geographic proximity. UNK currently has home scrimmages vs. Nebraska Wesleyan (Aug. 22nd) and Central C.C.-Columbus (Aug. 29th). The team, currently going through voluntary workouts that began June 1st, and will report to fall camp in mid-August.

The UNK men’s basketball team on Wednesday announced the signing Patrick Fraser. The 6-5, 190 pound wing from of Australia will have four years of eligibility remaining. Fraser prepped at the Sydney Church of England Grammar School (commonly known as the “Shore School”), located on the Lower North Shore of Sydney, New South Wales. This past season he averaged 18.9 points, 8.4 rebounds, 4.1 assists, 2.7 steals and 0.9 blocks per game while shooting 77% at the line and almost 40% from behind the arc. A two-time first-team all-conference selection he also was a New South Wales Under-18 and Under-20 representative. Fraser is UNK’s fourth recruit to date. The previously announced members of the class are junior guard Myles Arnold (Fontana, Calif.), freshman forward Thomas “TJ” Fritz (Wamego, Kan.) and junior forward Darrian Nebeker (West Jordan, Utah). Fraser joins junior Matt Brien (New Zealand) as UNK’s international players in 2020-21.

Shrine Bowl officials say everything is a go for the July 11th game in Kearney. With outdoor gatherings able to have a maximum of 10,000 with 75% capacity starting July 1st, the Shrine game will likely sell tickets to the public. Previously, attendance was going to be limited to family members only. The Shrine Bowl committee will decide how many tickets will be available while observing social distancing guidelines for UNK’s 5,200-seat Cope Stadium. Rosters for the 62nd annual Shrine Game will be announced soon.