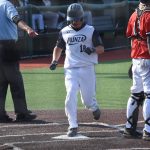 Nebraska football coach Scott Frost and men’s basketball coach Fred Hoiberg will donate a portion of their salaries for the upcoming year back to the Nebraska athletic department’s general operating fund. The amount of the pay cut is not yet known, pending the finalization of Nebraska’s athletic department budget for 2020-21. The fiscal year resets July 1st. Frost makes $5 million per year, Hoiberg is to set receive a $1 million bonus July 1st while making $3 million in salary. Coach Frost said, “I wanted to do my small part to help ensure our athletic department and all of our teams have the necessary resources to compete for championships moving forward.”

Athlon has Nebraska pegged for a fourth place finish in the Big Ten West. According to their website, “For Nebraska to get to the postseason and post a winning record” they will need to start fast. Nebraska’s final five games are against teams that were ranked in the Top-25 at the end of last season… three of those games are on the road. Wisconsin is picked to win the West, Minnesota is second, Iowa is third. Purdue is fifth, followed by Northwestern and Illinois. Ohio State is picked to win the East, with Penn State second, Michigan is third. Rounding out the East are Indiana, Michigan State, Maryland and Rutgers. According to Athlon, the Buckeyes will top the Badgers in the Big Ten Championship Game.

The schedules for the UNK men’s and women’s basketball teams were revealed by the MIAA Thursday. To help alleviate costs brought on by the Covid-19 crisis, all NCAA Division II men’s and women’s basketball programs are playing a maximum of 22 games this winter. The MIAA, and several other conferences, got rid of non-con games as a way to meet that new limit. UNK has 11 home and 11 road games with five dates in the Health & Sports Center before the Holiday break. The Lopers open the year at home vs. Emporia State on Thursday, November 18. The MIAA Tournament will now feature just eight teams instead of 10 and the event will last four instead of five days. It will remain in Kansas City and Municipal Auditorium (March 4-7). The Lopers will begin official team workouts in October.