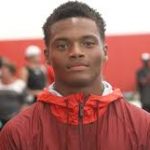 Four-star wideout Latrell Neville verbally committed to the Huskers Saturday. The 6-foot-4, 190-pound wide receiver from Texas had over 40 offers to his name and picked the Huskers over the likes of Alabama, Ohio State, Oklahoma, Arizona State, Auburn, Florida, LSU, Georgia, Michigan, Penn State, Virginia Tech and others. Neville becomes the 11th known verbal commit for Nebraska’s 2021 recruiting class. He is also the second receiver in the class joining Georgia wideout Shawn Hardy.

In other Husker headlines on HUSKERMAX.COM; Nebraska was shut out on the Big Ten Network’s all-decade team… and Adrian Martinez is one of CBS Sports’ five biggest bounce-back players for 2020.

The 62nd Nebraska Shrine Bowl will be played this Saturday in Kearney. Players arive in Kearney today. The rosters look a bit different compared with the original list released in February. Twenty-two of the original 74 players will not be participating, mostly because of college football commitments. The only Nebraska walk-ons still listed are Bladen Bayless of Beatrice, Nate Boerkircher of Aurora, and Braden Klover from Southern, all will play for the South. The South squad also includes Kearney High’s Jackson Miller. The game will be played Saturday at UNK’s Ron and Carol Cope Stadium at Foster Field, kickoff will be at 2:00.

UNK’s Rick Squiers has been named Midlands college women’s coach of the year by the Omaha World Herald. Squiers led the Lopers to a 38-1 record and a national runner-up finish for the second time in program history. The Lopers have compiled a record of 676-89 and qualified for the NCAA tournament every year since Squiers became the head coach in 1999. The Lopers will play a condensed schedule this upcoming fall due to COVID-19 pandemic as each Division II team can play on only 20 dates.

Hastings point guard Shandra Farmer a co-recipient of The World-Herald’s Midlands female athlete of the year award. She is sharing the honor with Concordia center Philly Lammers. Farmer was named the GPAC player of the year, and Lammers was the GPAC defensive player of the year.

Hastings Sodbusters head coach Bill Clay has stepped down over concerns for his personal health and safety due to rising COVID-19 cases across the country. Sodbusters co-owners, Bryan Frew and Scott Galusha, are looking for Clay’s replacement. In the interim, Galusha will serve as head coach.