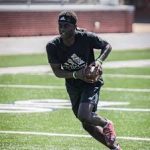 Lardarius Webb Jr., a cornerback from Mississippi, announced his commitment to the Huskers Tuesday. The 5-foot-10 170 pound prospect is the son of former NFL player, Lardarius Webb who spent nine years in the pros. Webb Jr. registered 51 total tackles — including 30 solo — in addition to three interceptions as a junior. He is the 12th verbal commit, and the first defensive back in the Husker’s 2021 recruiting class.

Former Husker running back Rex Burkhead has reworked the final year of his contract with the New England Patriots. Burkhead’s base salary will drop from $2.5 million to $1.05 million. He’ll receive $550,000 upon signing and up to $400,000 in possible roster bonuses. Burkhead, who turned 30 last week, will be entering his fourth season with the Patriots in 2020. He joined the team on a one-year deal in 2017 then signed a three-year contract prior to the 2018 season.

In other college football news; Power-5 conference leaders remain in wait-and-see mode about an on-time start for football as reported coronavirus cases climb.

Coaches and players in this Saturday’s Shrine Bowl are holding their third practice today in Kearney. Lincoln High’s Mark Macke is coaching the North team, Ashland-Greenwood’s Ryan Thompson will lead the South. There have been three more late roster changes. The North squad now includes Nebraska walk-on lineman Keegan Menning from Fremont. The South team has added Paxton Swanson of Platteview and Seth Firmanik of Fairbury. The 62nd Nebraska Shrine Game kicks off at 2:00 this Saturday at UNK’s Ron and Carol Cope Stadium at Foster Field.