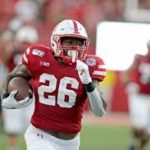 Husker running back Dedrick Mills has been named to the 2020 Doak Walker Award watch list. The honor is awarded to the nation’s top running back. The Husker senior and frontrunner to start in 2020 season rushed for 745 yards, 10 touchdowns and 5.21 yards per carry last season. Ameer Abdullah was the Husker’s last finalist in 2014. It is his second time on the list for Mills, as he was a preseason pick following his freshman year at Georgia Tech.

Milwaukee-area offensive lineman Marcus Mbow on Wednesday announced on Twitter that Nebraska is one of five schools in the running for his verbal commitment. The others are Iowa State, Virginia, Michigan State and Arizona State. The 6-foot-6 and 285-pound Mbow is a three star prospect according to Rivals and 247Sports. Nebraska already has two offensive tackle commits in their 2021 recruiting class — Teddy Prochazka and Branson Yager, plus offensive guard Henry Lutovksy.

Former Husker wrestler Jordan Burroughs, who continues to prepare for the 2021 Summer Olympics, announced Wednesday that he’ll return back home after the Olympics and become part of the Pennsylvania Regional Training Center in Philadelphia. He’ll compete as a resident athlete with PRTC starting in September 2021, finishing his wrestling career in an area where it started. The training complex is 23 miles away from Burroughs’ hometown of Sicklerville, New Jersey.