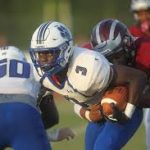 The Carpet Land American Legion baseball team, made up of Lincoln East players, will cancel the remainder of its baseball season after two players tested positive for COVID-19 on Wednesday. Carpet Land is the 2nd Lincoln team to have their season affected by Coronavirus.

UNK Athletic Director Marc Bauer announced today that head volleyball coach Rick Squiers has signed a contract extension that makes him leader of the Loper volleyball program through the 2022 season. Since his arrival prior to the 1999 season, UNK has gone 675-89, qualified for 21 consecutive NCAA Tournaments, won 16 regular season conference titles and 11 conference tourney titles. Off the court, the Loper team grade point average was a 3.69 for the 2020 spring semester. The Lopers hope to begin fall camp in mid-August with the current season-opener set for September 4-5 in Golden, Colo.

Nebraska has added a three-star 2020 prospect as a walk-on. Jaquez Yant, a running back from Tallahassee (Fla.) announced the move on social media Thursday morning. The 6-foot, 185-pounder was considered a three-star recruit by ESPN and 247Sports, with both services reporting offers from Mississippi and Southern Miss.

Sports Illustrated has posted their evaluation of Nebraska 2021 quarterback commit Heinrich Haarberg. The website calls the Kearney Catholic QB an All-American candidate and a said with some more weight and development he could become an extremely gifted Power 5 quarterback.

According to a story in USA Today, the Nebraska athletic department reported 12-million dollars in profits during the 2018-19 fiscal year. Nebraska ranked 21st in total revenue, bringing in slightly more than $136.2 million dollars. The 12-million dollars in profits was the second-most in the Big Ten, behind Indiana, which made $13 million. Nebraska was seventh in the Big Ten in total revenue, and eighth in spending. Texas brought in the most revenue at $223.8 million. Ohio State spent the most in the nation, shelling out $220.5 million to fund the athletic department.

The Big East on Thursday cancelled all nonconference competitions for its fall sports teams. The news affects Creighton’s volleyball team, men’s and women’s soccer teams and the cross country program. The Big East has not announced any plans regarding its own postseason championship events for the fall. Creighton is on the books to host this year’s Big East volleyball tournament.

The NCAA Sport Science Institute on Thursday released extended guidelines to help schools continue to navigate a return to fall sports in the midst of the coronavirus pandemic. The guidelines include testing and results within 72 hours of competition in “high contact risk sports,” and the use of face coverings and social distancing during training, competition and outside of athletics.