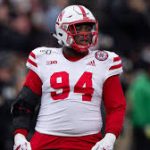 Former Husker Khalil Davis has reportedly agreed to contract terms with the Tampa Bay Buccaneers. A sixth-round pick this past year, Davis is projected to make $3.47 million over four years.

There are 26 former Huskers on the new edition of the Madden video game. Tampa Bay Buccaneers linebacker Lavonte David is again the highest-rated Husker with a 90 overall rating. But this year he’s joined by Las Vegas Raiders offensive lineman Richie Incognito, who also has a 90 overall rating. Madden NFL 21 will be released on Aug. 25.

Rutgers, a scheduled road opponent for the Huskers this fall, will adhere to a New Jersey directive limiting outdoor gatherings to 500 people or fewer.

California is delaying its high school football season until December or January, which will affect Husker commit Will Schweitzer and other prospects in the state.

A former Nebraska volleyball player is among nine women who filed a lawsuit Monday against the University of Nebraska alleging the school mishandled complaints of sexual assault and harassment, including reports involving accusations against at least five athletes. The lawsuit filed Monday in the U.S. District Court for the District of Nebraska alleges violations under the Title IX gender equity law, as well as racial discrimination, negligence and lack of due process. The lawsuit also alleges that school officials made errors in their investigations of some of the women’s reports and did not provide academic help.

The University of Nebraska at Kearney is delaying the start of fall sports competition to Sept. 28th due to the coronavirus pandemic. UNK and Mid-America Intercollegiate Athletics Association officials announced the decision Monday. It was approved unanimously by chancellors and presidents of the conference’s 14 schools. Football, volleyball, cross country, women’s golf, women’s soccer and women’s tennis will all start about one month later than anticipated. Student-athletes at UNK and all MIAA schools will report for fall camp and begin practices Aug. 31st. Nine of the 23 conferences in NCAA Division II have canceled fall seasons.

Under the current plan:

UNK football will play seven games in the fall and open its season Oct. 3rd at home against Missouri Western. The Lopers first three previously-scheduled games – against Northwest Missouri State, Lincoln University and Central Missouri – will be moved and played in the spring.

The UNK volleyball team will open Oct. 2nd with a home match against Northwest Missouri State. The team’s five matches scheduled for September will be moved to the spring.

The Loper women’s soccer team opens Oct. 2nd at home against Newman University and will move its four games scheduled in September to the spring.

Schedules for women’s tennis, women’s golf and cross country are still being finalized.

The NSAA says the 2020 fall sports season will go on as scheduled. In Monday’s email NSAA officals said “the health and safety of our student participants, coaches, and officials has been our priority as we work to provide activities for our member schools. This will not change, and modifications may have to be made. We will continue to work with the Governor’s office, Nebraska Department of Education, and the local health departments to make the best decisions for your students and our member schools.” First practices for football, volleyball, cross country, girls golf, boys tennis, and softball are set to begin August 10th.