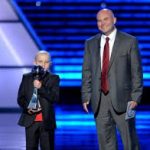 The father of Jack Hoffman, Andy, has been diagnosed with a brain tumor. He revealed the news in a Facebook post, saying he had a seizure Sunday while running in Atkinson, Nebraska. An MRI revealed a “massive brain tumor.” He’s at the Mayo Clinic now to figure out the next steps in his treatment. His son Jack, who was diagnosed with brain cancer at the age of 5 in April 2011, gained national attention when he ran for a touchdown during Nebraska’s 2013 spring game. His 69-yard run earned an ESPY for Best Moment in Sports.

Malik Williams, a three-star cornerback from Georgia, announced his commitment to the Huskers Tuesday. The 6-foot, 187-pound defensive back had almost 20 scholarship offers from the Big Ten, SEC and Pac-12. He is the 14th recruit in the Huskers’ 2021 recruiting class, joining recent defensive back commits Lardarius Webb Jr. and Marques Buford.

The Nebraska Unicameral has approved a bill that would clear the way for college athletes to get paid for endorsement deals. Legislative Bill 962, or the “Fair Pay to Play Act,” was introduced by Omaha Sen. Megan Hunt, and was patterned after a California law passed last fall. On a 35-6 vote, state senators sent the bill to Gov. Pete Ricketts for his approval or veto.

The Great Plains Athletic Conference and the Heartland Athletic conference both announced intentions to move forward with the fall sports season. Student-athletes can begin practice Aug. 15. Games can start Sept. 5, except for football, which must wait until Sept. 12. This decision affects Hastings College athletics as the Broncos are a member of the G-PAC. Peru State is a member of the Heartland.