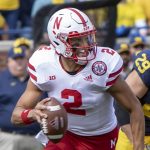 Husker quarterback Adrian Martinez earned preseason recognition on Friday morning, as he was named to the Maxwell Award watch list, which is presented annually to the College Player of the Year. Martinez, who was also named to the Maxwell Award watch list in 2019, has started the last two seasons for the Huskers. He has already tied or set 11 school records, including NU’s career record for games with at least 400 yards of total offense (four). He is one of just four active FBS quarterbacks with at least 4,000 passing yards and 1,000 career rushing yards. He already ranks seventh in school history in passing yards and fifth in total offense. Martinez is bidding to be the Huskers’ fifth Maxwell Award winner, joining Mike Rozier (1983), Tommie Frazier (1995), Eric Crouch (2001) and Ndamukong Suh (2009).