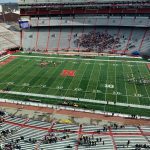 The decision that had been speculated on for over a week finally came down from Omaha Public Schools on fall athletics.

“During our time in the 100% Remote Learning Instructional Model, all activities and athletics will be suspended,” OPS said as part of a statement regarding back to school procedures. “We understand the important role extra-curricular activities play in a student’s school experience. This suspension is for the health and safety of everyone.”

The second quarter is set to begin October 26.

The impact of the seven OPS schools—Omaha Benson, Omaha Bryan, Omaha Burke, Omaha Central, Omaha North, Omaha Northwest and Omaha South—suspending activities and athletics through the first quarter is being felt across Class A.

It was also decided by the Board that any games missed due to COVID-19 could be made up by finding another school with the same open date. Bellar says the NSAA is “assisting schools through the process of scheduling replacement games.”

Lincoln has six schools that compete in Class A football.

Lincoln Southwest is the hardest hit, losing four games and having a district that has been stripped to just them and Papillion-La Vista South.

Lincoln High loses three games but only one team from their district.

There are six other NSAA sports in the fall season—cross country, girls golf, softball, boys tennis, and volleyball. While their regular-season schedules will also be affected, they are put together by schools instead of the NSAA.