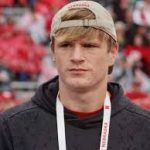 Thomas Fidone, the blue-chip tight end from Council Bluffs, announced his commitment to the Huskers last night. According to the website Top247, Fidone is the No. 1 prospect in the state of Iowa, and the 2nd best tight end in the nation. At 6-foot-5 and 222 pounds, the 4-star prospect ran a 4.63 40-yard-dash with a 37.4-inch vertical jump at the Warren Academy Showcase in Omaha. His offer list of nearly 40 schools included Alabama, LSU, Michigan, Iowa, Texas and Notre Dame. He is the 16th known member of the Huskers’ 2021 recruiting class. The Huskers are expected to add at least one more tight end during this recruiting cycle. Fidone’s pledge pushes the Huskers up 12 spots to No. 27 in the 247Sports Composite Team Rankings.

A group calling themselves “BigTen Parents United” released a letter to Big Ten conference officials Wednesday. Representing the parents of players from 11 of the 14 Big Ten member schools, the group’s letter was addressed to Big Ten Presidents, Chancellors and Commissioner Kevin Warren. The group says they are “extremely disappointed” in the open letter released by Warren in response to previous letters written by separate Big Ten parent groups. The letter from “BigTen Parents United” featured three specific demands. They are asking for the release of “all documents, video recordings, communications and minutes of meetings related to the decision to cancel the fall sports season”. They are also demanding a Parent Organization Forum to answer questions concerning the process and any decisions moving forward. And they are asking for more information about the conference’s Return to Competition Task Force, including whether the task force will include players and parents in the decision-making process and what criteria they will use to determine whether there will be a season. Wednesday’s letter argued that if Commissioner Warren felt it safe for his son to continue playing at Mississippi State, “surely, the organization you lead is at least equipped to do the same.” Wednesday’s letter made no mention of possible legal action. A group of 11 Nebraska parents has previously threatened to file a lawsuit against the Big Ten if they failed to produce documents related to the conference’s decision to postpone the fall sports season. Their deadline of Monday at noon passed without any communication from the league.

Hastings College is picked to finish 8th in the G-PAC Football pre season coaches poll. Morningside is the pre season #1. The Broncos open the season by hosting Dakota Wesleyan in September 12th.

Hastings college volleyball is picked 8th in the G-Pac pre season poll. Northwestern is the pre season favorite to win the league. The Broncos open up this Sunday at Mayville State.