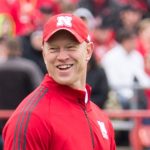 The Huskers held on to defeat Penn State Saturday 30-23. Husker head coach Scott Frost had high praise for his defense, who held on fourth down on back-to-back drives inside the Husker 11-yard line. The Huskers will host Illinois this Saturday at 11:00. The Fighting Illini picked up their first win of the season Saturday at Rutgers.

In other Husker related headlines:

Bellevue West junior Micah Riley has Nebraska in his top eight. According to 247Sports Composite rankings, the 6-5 280-pound three star prospect is the 13th best tight end prospect in the country and No. 3 junior recruit in the state of Nebraska.

Six-man standout Carson Rohde from Sumner-Eddyville-Miller announced he’s walking on at Nebraska. The 6-foot-3 and 270 pounds Rohde is the sixth known member of the Husker walk-on class for 2021.

The Big Ten has quietly given the green light to pairing two conference teams together for a game if their opponents need to cancel that week for COVID-19 reasons.

The Nebraska men’s basketball team added its highest-ranked recruit in the modern era on Friday, as five star prospect Bryce McGowens signed a National Letter-of-Intent to attend Nebraska next season. The 6-6, 170-pound guard from Pendleton, S.C., is the No. 3 shooting guard nationally in the 247 Sports Composite, which combines all of the national major recruiting services. McGowens is the first-top 50 recruit to sign with the Huskers coming out of high school in nearly 30 years.

The USHL declared Sunday’s game between the Tri-City Storm and Waterloo a “No Contest”. According to a statement from the league office, the decision was made after determining safety protocols set in place by the league were not met. The game will be rescheduled. The Storm will close out a four game homestand this weekend with a pair of games against the Fargo Force.

The NSAA on Friday released a statement saying the State Football Championships will not be played next week at Memorial Stadium in Lincoln. The Class A, B, C1, C2, D1, and D2 State Championship Football Games will instead be played at home sites this Friday. The higher seed will host in all classes. Game times will be mutually agreed upon by the participating schools. The host schools will be required to follow the previously established NSAA Post-Season Protocols. The Class D6 Championship Football Game will proceed as scheduled in Kearney at Cope Stadium on Friday.