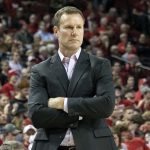 The schedule for the Nebraska men’s basketball team was released Wednesday by the Big Ten Conference. Half of their conference games are against teams ranked in the AP Top-25 Preseason poll. In all, seven Big Ten teams are ranked: Iowa (4), Wisconsin (7), Illinois (8), Michigan State (13), Ohio State (23), Rutgers (24) and Michigan (25). The Huskers 20-game conference schedule begins Monday, Dec. 21st, when they travel to Madison to take on defending Big Ten co-champion Wisconsin. The Huskers’ home opener is set for Christmas Day, Friday, Dec. 25th, when they host Michigan. The Husker men open their season next week Wednesday with a game against McNeese State at the Golden Window Classic in Lincoln.

The UNK basketball teams open their season tonight, hosting MIAA foe Emporia State at the Health and Sports Center. The women tipoff at 5:30, the men at 7:30. Due to recent COVID protocols, the general public will not be able to attend Loper home games this semester.

The UNK volleyball team will hold their final “Blue/White” scrimmage of the fall Friday night at 7:30. The Lopers spring season should begin in late February, specific details will be released next month by the MIAA league office.

The Loper football team will close out their abbreviated Fall schedule Saturday when they host Missouri Western State, kickoff will be at 11:00.

The Tri-City Storm on Wednesday announced the signing of 15-year old defenseman Andrew Strathmann from Illinois to a tender agreement for the 2021-2022 season. The Storm will close out a four game homestand this weekend with a pair of games against the Fargo Force.

NET will televise two High School Football Championship Finals Friday. The C-2 championship featuring Ord vs. Archbishop Bergan will be televised from Heedum Field in Fremont at 3:00. That will be followed by the Class A Championship Final, Elkhorn South vs. Omaha Westside live from Phelps Field in Omaha at 7:00.

The Class B, C1, D1 and D2 Championship Finals will be livestreamed at netNebraska.org and the NET Nebraska App.

Those games will be recorded for television broadcast at a later date in December.

The Class D6 Championship Final featuring Sterling vs. McCool Junction, at Cope Stadium in Kearney will kickoff Friday at 7:00 p.m. and will be televised by News Channel Nebraska and livestreamed on the NFHS Network.