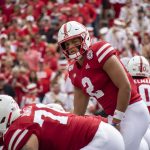 The Huskers picked up their second win of the season Saturday, holding off the Purdue Boilermakers 37-27 in West Lafayette, Indiana. The Huskers finished with 362 yards of total offense. Junior QB Adrian Martinez completed 23-of-30 for 242 yards and one TD. He also had 45 rushing yard and two scores on 13 carries. Sophomore Wan’Dale Robinson had nine receptions for 114 yards, and two carries for five yards. The Blackshirts held Purdue to 332 total yards, including minus-2 yards rushing. It’s the first time the Huskers have held an opponent to negative rushing yards since Michigan had minus-21 yards back in 2013. It is the sixth-fewest rushing yards Nebraska has ever allowed in a road game. The Huskers will play their final home game of the season Saturday, hosting West Division foe Minnesota. The Gophers have been off since their November 20th 34-31 win over Purdue. Their game at Wisconsin, and last week’s game against Northwestern, were both cancelled because of their elevated COVID numbers. The 2-4 Huskers and 2-3 Gophers kickoff Saturday morning at 11:00.

Ru’Quan Buckley, a three-star defensive end from Michigan, announced his commitment to the Huskers Saturday. According to 247Sports Composite rankings, Buckley is the 15th best player in the state of Michigan and the 36th best strongside defensive end in the country. The 6-foot-6, 270-pound senior chose Nebraska over offers from Michigan State, Minnesota, Cincinnati, Florida State, and Oregon. Buckley confirmed he will be an early enrollee… and with his commitment, the Nebraska recruiting class now sits at 20th best in America and the 4th best in the Big Ten.

Linebacker Patrick Payton from Florida announced he’s decommitting from the Huskers. Payton is a four-star prospect as rated by 247Sports. The Huskers have now suffered a pair of de-commitments from outside linebackers in this class. Will Schweitzer, a three-star defender from California decommitted back in August.

The Nebraska women’s basketball team opened their season this past weekend with a pair of wins at Pinnacle Bank Arena. The Huskers ran away from Oral Roberts Friday, 90-61. They topped Idaho State yesterday, 64-51. The Husker women will open conference play Thursday with a home game against Illinois. Tipoff will be at 7:00.

The UNK men’s basketball team picked up their first win of the season Saturday, holding off longtime rival Fort Hays State, 84-80, at the Health & Sports Center. Senior guard Jake Walker finished with a team high 20-points. He was one of four Loper starters to finish in double figures. The UNK basketball teams hit the road for the first time this season with games this week at Newman and Central Oklahoma.

The Hastings College basketball teams were topped by Northwestern Saturday in Orange City, Iowa. The Bronco men fell to 3-6 overall, and 0-5 in conference play with a 111-79 Red Raider victory. The Bronco women are now 2-4 on the season and 2-3 in conference play after losing 79-57. The Hastings College basketball teams are back in action Wednesday with games against the Doane Tigers in Crete.