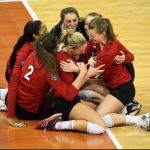 The Nebraska volleyball schedule is set. The conference-only schedule is 11 weeks long, with two games each week against the same opponent. Regular-season competition runs January 22nd through April 3rd. The first and second rounds of the NCAA Tournament will begin April 8-10. NCAA Regionals will be April 15-17 with the NCAA Semifinals on April 22 and the NCAA Final on April 24. Nebraska opens the season at Indiana on Jan. 22 and 23. The Huskers then return home to take on Northwestern (Jan. 29-30) and Maryland (Feb. 5-6) before traveling to New Jersey to face Rutgers on Feb. 12 and Feb. 13. The next week, the Huskers host Minnesota on Feb. 19 and Feb. 21 before heading to Wisconsin to take on the Badgers on Feb. 26 and Feb. 27. The Huskers open the month of March with an away series against Illinois (March 5-6). On March 13-14, NU hosts Ohio State. The following week, Nebraska will play Iowa in a two-game series where each team gets a home match. The match on March 17 will be in Iowa City while the match on March 20 will be in Lincoln. Nebraska finishes the month in Ann Arbor when it competes against Michigan on March 26 and 27. The Huskers finish the regular-season at home against Penn State on April 1 and 2.

Nationally ranked Ohio State pounded the Nebraska men’s basketball team, 90-53, last night in Columbus, Ohio. It’s the Huskers third straight loss to a ranked Big Ten opponent. Now 4-6 on the season and 0-3 in the Big Ten, the Huskers will face another nationally ranked conference foe this Saturday when they host the Michigan State Spartans, who are ranked 17th in the AP Top-25, and 18th in the Coaches Poll. The Huskers and Spartans are set to tipoff Saturday night at 7:00.

The Nebraska women will face the defending Big Ten regular-season champion, nationally ranked, Northwestern this afternoon at Pinnacle Bank Arena. The Husker women are 1-2 in conference play, but have dropped their last three games to fall to 3-3 on the season. At 4-0 on the season and 2-0 in Big Ten play, Northwestern is ranked 15th in the AP Top-25 and 16th in the Coaches Poll. Tip-off between the Huskers and Wildcats is set for this afternoon at 1:00.

Senior Nebraska cornerback DiCaprio Bootle will not be back at Nebraska for a sixth season in 2021. The 5-foot-10, 195-pound Miami native joins offensive linemen Brenden Jaimes and tight end Jack Stoll as seniors who will not return next season. Bootle finished his career by making his 32nd straight start vs. Rutgers, and played in 44 games over his career from 2017 to 2020. He posted 110 tackles, one interception and 27 pass deflections during his tenure as a Husker.

Defensive lineman Keem Green has entered the transfer portal after seeing limited playing time in two seasons as a Husker. The 6-foot-5, 320 pound former four-star prospect will still have two years of eligibility remaining in 2021 and 2022.

The Tri-City Storm are hosting the Lincoln Stars tonight at the Viaero Center. The puck drop is set for 7:05.