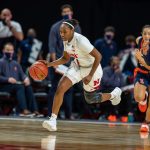 The Nebraska women’s basketball team picked up their second straight Big Ten win yesterday, winning on the road at Maryland, 53-50. Sam Haiby led three Huskers in double figures with 16 points. The Husker women continue on the road this Thursday with a game at Michigan. Tipoff will be at 5:00.

The Nebraska men’s basketball team nearly rallied back from a 17-point second-half deficit before falling to No. 17 Michigan State, 84-77 Saturday night at Pinnacle Bank Arena. The Huskers trailed 52-35 with 17:34 remaining before making a spirited comeback behind the scoring of Teddy Allen, who had 19 of his team-high 23 in the second half. The Husker men will try to snap their four game losing streak tomorrow night with a game at Purdue, tipoff will be at 6:00.

Christian Bishop’s dunk with 0.8 seconds left was the difference as the 11th ranked Creighton men’s basketball team escaped Providence with a 67-65 win on Saturday. The Bluejays will host Seton Hall Wednesday night at 8:00.

Senior outside linebacker JoJo Domann announced Saturday afternoon on social media that he will return next season. Domann will be spending a sixth season on the roster for the Huskers in 2021, and gives Nebraska one of its biggest difference-makers back on defense. In eight games in 2020, Domann tallied 58 tackles, 6.5 for loss and two forced fumbles. For his Husker career, Domann has played in 41 games, making 137 career tackles, 3.5 sacks and forced seven fumbles.

Four-star linebacker, Wynden Ho’ohuli, announced his commitment to the Huskers Saturday. The 6-foot-3, 220-pound prospect from Hawaii revealed his commitment to the Cornhuskers during the All-American Bowl: Declaration Day special. He chose the Huskers over offers from Kansas State, Utah and Washington. He’s the No. 148 rated prospect in the nation, No. 9 among inside linebackers and No. 1 in the Aloha State for the 2021 class, per the industry-generated 247Sports Composite rankings. He will officially sign his “Letter of Intent” in February.

The Tri-City Storm topped the Lincoln Star Saturday at the Viaero Center 5-1. The two teams will meet for a fourth straight time Wednesday at the Ice Box in Lincoln.