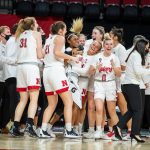 The Nebraska women’s basketball team opens up a two-game Big Ten home stand tomorrow with a game against 15th ranked Ohio State. The Huskers and the unbeaten Buckeyes are set to tipoff at 4:00.

The 6th ranked Nebraska wrestling team is at top-ranked Iowa tonight. 17 ranked wrestlers scheduled to compete between the teams, including the potential for top-10 matchups at 141, 174 and 197 pounds. The matchup starts at 8:10 p.m. (CT) and will be televised nationally on BTN.

– Linebacker Will Honas has joined the list of senior Blackshirts opting to return for the 2021 season. This past season, Honas had 57 total tackles in seven games, 6.5 tackles for loss and three quarterback sacks.

– Jonathan Rutledge is reportedly out after one year of overseeing Nebraska’s special teams in an off-the-field role.

The UNK men and 5th ranked Loper women’s basketball team defeated Missouri Western State last night at the Health and Sports Center. The men won 75-67, the women improved to 9-0 on the season with a 59-34 win. The Lopers will host Northwest Missouri State tomorrow afternoon. The women will tipoff at 2:00, the men at 4:00. The 2nd ranked UNK wrestlers will host Chadron State tomorrow at noon in Cushing Coliseum.

The Tri-City Storm opened up a three game series with Fargo Force last night with a 5-2 win in North Dakota. The two teams will meet again tonight and tomorrow night. The Storm’s next home game is January 22nd against the Lincoln Stars.