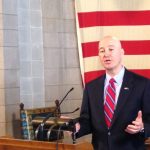 Ricketts, a fellow Republican and Trump supporter, says the president’s time in office is nearly over after his loss to Democratic President-elect Joe Biden in November.

He says the country should be focused on healing and ensuring a smooth transition of power.

The U.S. House impeached Trump for inciting an insurrection after the deadly mob siege at the U.S. Capitol.

Pro-Trump loyalists stormed the Capitol after the President called on them to “fight like hell” against the election results. However, the President also said in his January 6 speech that, “I know that everyone here will soon be marching over to the Capitol building to peacefully and patriotically make your voices heard.”