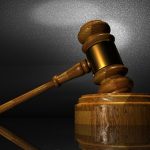 WAKEFIELD, Neb. (AP) — A northeastern Nebraska woman has been sentenced to five to 10 years in prison for child abuse that included locking two children in a bedroom and feeding them only once a day.

Angel Henderson told a judge on Friday that she and her husband adopted two special-needs children out of love. But the Sioux City Journal reported that Judge Bryan Meismer told Henderson they added more trauma to the kids’ lives.

Her husband, Patrick, pleaded guilty to child abuse in 2019 and was sentenced to four years in prison.