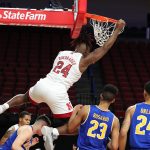 There was no change at the top of the latest AVCA Top-25 Poll. Wisconsin is still No. 1, followed by Texas, Kentucky, the Huskers and Minnesota. Penn State dropped two spots to 10th, Purdue is 11th and Ohio State moves into the rankings this week at No. 19. Creighton dropped three spots to No. 23. The 4th ranked Huskers travel to Madison this weekend for a pair of matches against the undefeated top ranked Wisconsin Badgers. First serve is at 7:00 Friday and 8:00 Saturday.

The Nebraska men’s basketball team will be trying to snap a three game losing streak tonight when they host Penn State. The Huskers’ lone conference win was at Penn State. Teddy Allen scored in the final seconds of that game to lift the Huskers to a 62-61 win. The Nittany Lions are also struggling. They have lost four in-a-row, and are 1-8 away from home. The Huskers and Nittany Lions tipoff tonight at 7:00 at Pinnacle Bank Arena.

Nebraska forward Isabelle Bourne was named the Big Ten and College Sports Madness National Women’s Basketball Player-of-the-Week Monday. A 6-2 sophomore from Australia, Bourne had a career week with back-to-back double-doubles in wins at No. 24 Northwestern (Feb. 17) and against Penn State (Feb. 21). For the week, Bourne averaged 21.5 points, 14.0 rebounds, 3.5 assists and 2.0 blocks. The Husker women travel to Minneapolis tomorrow for a game against Minnesota. Tipoff will be at 6:00.

Former Husker quarterback Luke McCaffrey is transferring to Louisville. He made the announcement yesterday on social media. McCaffrey left the Husker program on Jan. 26th. A member of the ACC, Louisville is coming off a 4-7 campaign, and are 12-12 after two seasons under head coach Scott Satterfield. A four-star dual-threat quarterback, McCaffrey was the 257th best overall recruit nationally in the 2019 recruiting cycle.

Nebraska Athletics Director Bill Moos says there is a push to have Big Ten schools use local health officials as their guide in opening venues to the public, and he expects fans will be back in Big Ten football stadiums this fall.

The UNK softball team picked up two wins yesterday at the UCO/OC Festival in Edmond, Oklahoma. The Lopers topped Colorado Christian 11-7, and edged Southern Nazarene 2-1. The Lopers will travel to Springfield, Missouri this weekend for the Drury Invitational.