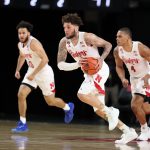 Despite a monster effort from Teddy Allen, the Nebraska men’s basketball team was edged by Penn State, 86-83, last night in Lincoln. The junior guard finished with 41 points, one off Eric Piatkowski’s school record set in the 1994 Big Eight Tournament. It’s the fourth straight loss for the Husker men, who have a game at 5th ranked Illinois tomorrow. In their first meeting in Lincoln, the Huskers lost to the Fighting Illini in overtime. Tipoff tomorrow night is at 6:00.

The Nebraska women’s basketball team is looking for their 10th Big Ten Conference win of the season tonight at Minnesota. In the first meeting this season, Minnesota connected on 15-of-32 three-point attempts in a 76-71 win in Lincoln. Tip-off between the Huskers and the Golden Gophers is set for tonight at 6:00.

The 13th ranked Creighton Bluejays will host the DePaul Blue Demons tonight. Creighton has been idle since an impressive 86-70 win over then-5th ranked Villanova. The Jays topped the Blue Demons last month in Chicago, 69-62. Tip-off tonight is at 8:00 at CHI Health Center Omaha in Omaha.

Millard North’s Hunter Sallis has earned a spot on the 24-player McDonald’s All-American team, becoming the state’s first representative on the boys all-star squad in 39 years. The only other Nebraska high school boy to be named a McDonald’s All-American was Omaha Creighton Prep’s Kerry Trotter in 1982. Trotter, who starred at Marquette, is Sallis’ cousin. A five star prospect, the 6-foot-5 Sallis hasn’t yet made his college choice, but plans to announce his decision March 26th. His finalists are Creighton, Gonzaga, Iowa State, Kansas, Kentucky, North Carolina, Oregon and UCLA.

The NCAA will allow spectators when the women’s volleyball tournament is held in Omaha this April. Attendance will be limited to 25% of the venue’s capacity and in accordance with state and local health mandates. That figure will include all athletes, coaches, essential staff, family members and fans. The NCAA said ticket sales will be available closer to the tournament dates. The 48-team tournament will be held April 13-24 entirely in Omaha at the CHI Health Center arena and attached convention center.