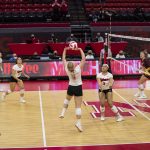 This weekend’s Nebraska at Wisconsin volleyball series has been postponed due to health and safety concerns related to COVID-19. The top-ranked Badgers yesterday announced a two-week pause in all team activities because of multiple COVID-19 cases within the program. The 4th ranked Huskers are scheduled to play at Illinois next week.

The Nebraska men’s basketball team lost at 5th ranked Illinois last night, 86-70. It’s the fifth straight loss for the Husker men. They host Minnesota tomorrow night at 6:00. The Gophers, who are 0-8 away from home, topped the Huskers in their first meeting in Minneapolis, 79-61.

The 13th ranked Creighton Bluejays travel to Cincinnati, Ohio tomorrow for a game against Xavier. The Jays topped the Musketeers earlier this season in Omaha. Tipoff is tomorrow afternoon at 4:00.

The Creighton women’s basketball team was blasted by top-ranked U-Conn last night in Omaha, 81-49. The Lady Jays will close out the regular season tomorrow, hosting St. Johns at 1:00.

The Nebraska women’s basketball team’s final home game of the regular season is tomorrow, they’ll host Michigan State. The Huskers topped the Spartans earlier this season in East Lansing. Tipoff at Pinnacle Bank Arena is set for Saturday afternoon at 1:00.

The Nebraska softball team opens their season this weekend in Florida. The Huskers will play three doubleheaders in three days in the Sunshine State, facing Indiana twice today, Michigan State twice on Saturday and Ohio State twice on Sunday.

In Husker football related news;
– Plans are said to be in the works for a 2022 season opener in Ireland, perhaps against Northwestern.
– Running back Markese Stepp tops Athlon Sports’ list of newcomers to keep an eye out for in Lincoln this fall.
– Georgia center Steven Nahmias is on the Huskers’ recruiting wish list for 2022. The Huskers offered the 6-foot-3, 285-pounder a scholarship in April.
– 2022 Bellevue West tight end, Kaden Helms, has now earned a four-star rating in 247Sports’ latest update. The service lists him as the No. 3 player in the state behind offensive lineman Deshawn Woods (Omaha Central) and Devon Jackson (Omaha Burke) and the No. 12 tight end in the country. Helms also moved in Rivals’ latest update to the No. 19 tight end in the country. His high school teammate, tight end Micah Riley-Ducker, is a four-star prospect according to Rivals (No. 13 TE nationally) and a three-star via 247Sports (No. 19 TE).
– Players who have picked up recent scholarship offers from Nebraska: three-star defensive back Kylon Griffin (Montgomery, Alabama), three-star wide receiver Jarel Williams (Saraland, Alabama) and wide receiver C.J. Smith (Orlando).

The top ranked UNK wrestling team is in Grand Junction, Colorado this weekend for the NCAA Super Region VI Championships. To secure a spot at nationals this year a wrestler in Region VI has to win his weight class. Seven “Wild Cards” will then be selected at a coaches meeting for a total of 17 qualifiers. The national meet will be held in St. Louis, Missouri., March 12-13.

The Tri-City Storm continue their eight game homestand against Fargo and Sioux City this weekend. The puck drop tomorrow night is at 7:05, and Sunday afternoon at 4:05.